From COPTR
Jump to navigation Jump to search

Tools that have this format as input[edit]

no tools have been registered with this format as input

Tools that have this format as output[edit]

No tools have been registered with this format as output

ADDML (Archival Data Description Markup Language) is a format for describing technical structures in a dataset. The format was developed by the National Archives of Norway in the late 1990s. Today normally used versions are ADDML 8.2 or ADDML 8.3. The format are today in use in Norway and Sweden. It is open for everyone interested to take part in the further developement of the format and it is free of use. 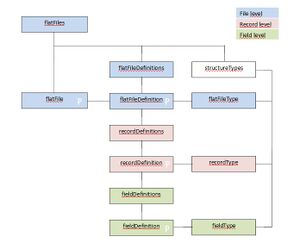 Under the element "dataObjects" it is possible to describe structures which are not flat files. This is again based on a generic structure where the user have to define himself the actual structure.

In addition it is possible on spesific elements to specify a process. This will not actually be a process, but a flag indicating to an application that a certain process should be performed while reading the datafiles.