From COPTR
Jump to navigation Jump to search 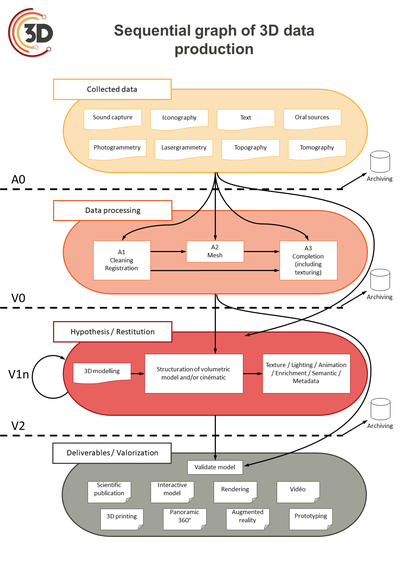 Each step may be archived independently. The AIP should be properly linked.All steps may be gathered in a single archive.

A0 = raw acquired data
For example:

These data are the most important to archived. They are the primary sources and the condition for the data to be re-used (i.e. the purpose of an archive).

V0 = A0 + basic human action + software process.
This is the first 3D technically validated by a human.

It may have been:

These data are archived, because they are the basis of the humanity work.

It may have been:

These data are not archived because they are work-in-progress files.

V2 = scientifically approved V1n
I concerns the approved options developed in V1n.
I may be approved by any scientific committee.
In the best case it is related to a published article.


These data are archived because they show the outcome of the project.

It presents the steps of the production process in a simplified way. The system of the graph has been defined to follow a logical path with notably the use of loops to express the recursive aspect of the work on data, especially during the hypothesis and restitution stages.

In a 3D restitution process: which data may be archived?
This workflow defines different steps in the creation of 3D data in humanities and social sciences.
It identifies how and when 3D data is produced.
It chooses 3D data for archiving.

3D is now commonly used for Cultural Heritage study, valorization and preservation. The gathered experiences make possible to define standard processes and practices to ensure data quality and their preservation. Under the supervision of the French national infrastructure for digital humanities (Huma-Num), the Consortium "3D for Humanities" has thus defined a life cycle of such data from creation up to archiving.

It was part of its missions that are:

This 3D life cycle was initially designed for archaeology, and is now open to any humanity field.

This workflow is designed to stage 3D data from raw acquired data to restitution.

We have formalized the different steps of data life Cycle.

A additional rendering stage may be considered when public communication and dissemination is carried out.

A0, V0 and all version of V2 are candidates for archiving.
We have formalized this process with a sequential graph.

Additionally to these conceptual stages, there hare been developed

The workflow is a consensus applied in all team of the french consortium for 3D. The teams are mainly focused on heritage objects.
It is being updated to work with fields of humanities others than cultural heritage.